These last couple of days has been all about data breach scandal at Facebook. If you haven't heard about it yet; then probably you are living on another planet. 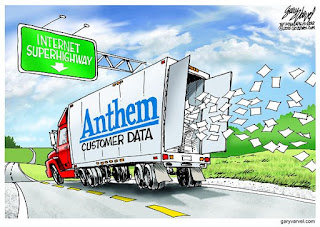 Cambridge Analytica, the London based elections consultancy firm is amidst an ongoing scandal alongside Facebook over the alleged harvesting and use of over 50 million users' personal data.  These data were then used to influence the outcome of 2016 US elections.
This company helps political campaigns reach potential voters online, it combines data from multiple sources to build profile of voters. The company then uses algorithms to predict voter behavior, which then could be influenced.

An academic Dr. Kogan created an app called "thisisyourdigitallife" in 2014 that was supposed to offer a personality prediction through a series of questions. This app was a personality quiz based on your Facebook data which includes information like your location, likes, preferences and such. About 270,000 people downloaded this app; who not only allowed it to access their data but also their friends'. Dr. Kogan passed on these user data to the political firm Cambridge Analytica. A whistle blower detailed the usage of these collected data; saying that these data harvested from millions of users were used to build models to exploit what they knew about them and turned it into psychographic profiles. What this means is identifying people based on their values, preferences, attitudes, interests, lifestyle and use this information to influence them.

So, if you took such a quiz; a seemingly harmless question like "Do you like beef?" can say a lot about your religious sentiments and emotions and give an idea about your ideologies and political preference. Someone out there has created an online profile of 'you' and using it to influence you without your knowledge. How is that for a  jolt?

What does this have to do with 2016 US elections?

Empowered by such a tool, the Trump campaign used these profiles to influence voters for 2016 US elections. What is the fun part here? Cambridge Analytica once featured Steve Bannon who served as the CEO of Trump's 2016 presidential bid on its board and is also partly owned by Robert Mercer, a billionaire who spent millions on Trump's campaign. The company helped the campaign identify voters to target with ads that influenced people's voting decisions and helped in strategic communications. The company's CEO admitted to the company being largely responsible for a vast amount of Trump's campaign. All the research, analytics, targeting. television and digital campaign were run by Cambridge Analytica.

But how can you use this information to influence?

Lets say you have a piece of news to share. Different takes on the same article is pushed to different groups based on the profiles created. It doesn't take long to figure out which one of them was more effective. The better one has more clicks, likes and more shares. The more clicks and shares, the louder the message is. The company created an effective data mining technique; which was then misused for political ads.

How did this come to light?

Cambridge Analytica's CEO who is now fired; boasted how the company could bribe, use sex workers, blackmail and sow misinformation to try and help political candidates in an undercover sting operation.

Facebook says Mr. Kogan mishandled the data but was obtained legally and within rules. The users logged into Facebook network to answer questions posed by the app; so they did it willfully. It said people knowingly provided their information, no systems were infiltrated and no passwords stolen. However since 2015; Facebook has prohibited app developers to request and receive access to data of users. Facebook told Cambridge Analytica to delete the data but it wasn't destroyed. Cambridge says it did not break any compliance policy since the data was received legally and fairly. Zuckerburg has now acknowledged that Facebook made mistakes and promised regulations on how much third party apps and app developers can access user information.

SCL India, the Indian branch of Cambridge Analytica's parent company SCL says both of India's biggest political parties are its clients.  Both Congress and BJP are now passing the buck to one another and denying links with SCL India and are accusing one another of using SCL's services. SCL India says it has successfully managed four election campaigns for BJP and among them names 2014 general elections.

Why does it matter to you and me?

This breach of data is a moral problem. Misuse of sensitive personal data without proper consent is trust issue. I keep advising few of my freinds who are over enthusiastic on social media not to click on quizzes and personality tests from third party app on Facebook and to set proper privacy settings because you are giving away too much of not only your information but also your connections'. It s exploitation; you cant make out the impact just because its virtual. All these social media accounts are so interconnected now; that to login to one account; you have to validate it with either Google or Facebook. These are so ingrained in our lives that their power is much more than one can imagine. Your information is being used without you being aware to change the face of the world. Isn't that scary?

Got a Twitter forward this morning and I think it couldn't have been said better. 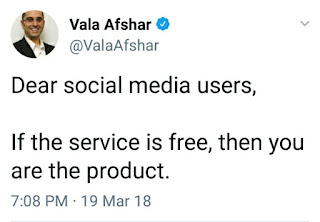