The President of the USA is known to be very active on twitter; particularly late night ramblings. Twitter is where he communicates his policies and decisions that affect not only his country but the world.

Some of his ramblings in the past have been dissected and made fun of. There was also a joke going around; that the first task the WH officials would do once he became the President would be to lock his twitter account. Well, Mr. Trump has been repeating his gaffes. Few days back; he left a two word tweet "WE" and the everyone had a ball trying to fill in the rest of the words he would've supposedly wanted to write. 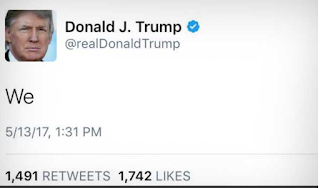 The tweet "We" started a movement and the handle #we was trending like crazy. It was just a two letter word but so powerful and inclusive. It was deleted within minutes but nothing leaves the internet; does it? The tweet was retweeted 1000 times and was memorialised by witty folks on the social media. From snarky comments to completing the word with lyrics to satire; it was a melee of creative thoughts and the reflection of what people think of the President and what they wished for like his resignation, better health care, wanting to know his close ties with Russia and so on.

The best one I loved among the lots were the below ones. 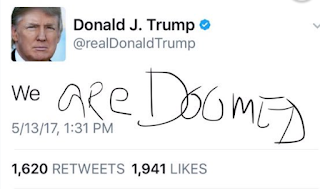 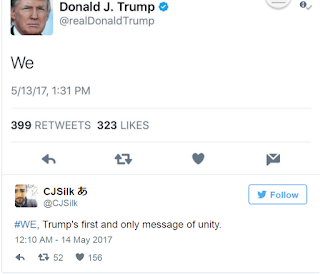 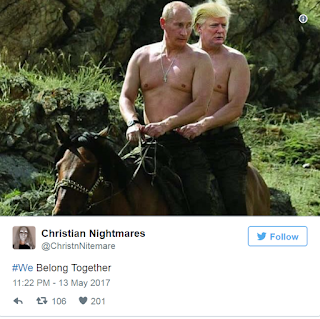 Earlier this month; Trump got confused between "Council" and "Counsel" when he tweeted thus: He meant "Counsel".

The desperate Merriam-Webster dictionary went on to educate Mr. Trump on the two homophones. 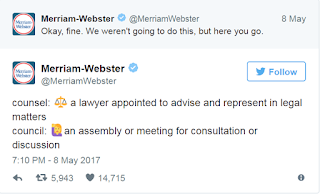 Did he learn? Nope, never! He again went on to tweet 10 days later; now with the spelling "Councel". He did retweet the same message again with the right spelling but perhaps was tired to delete the old one! 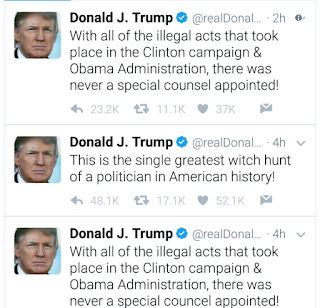 Mr. Trump did something similar last night. He posted something on Twitter that had a word that has people scratching their heads.

What is covfefe? Perhaps; Mr. Trump invented a new word. Or did he convey an encrypted message? Is it short for some complicated word? Or is it some word in European language or Arabic that he might've picked up during his recent travel?  Or did he just doze off mid-tweet?

Well, Trump sure does keep everyone at the edge of the seat? People have already started using the word "covfefe" in their posts and is sure going to be another crazy twitter handle. Some have started speculating that it might mean "coverage". It does come close to that. Meanwhile; I am wondering how do we pronounce "covfefe"?

Maybe "covfefe" is a mystery that will unravel much to world's joy.

Rains are beautiful, it brings life, energy and hope. But when its merciless; it can be trouble. The past few days has been raining cats and dogs in Bangalore with gusty winds. The inconvenience is inexpressible. Rains - are beautiful only if you are not stuck in it. 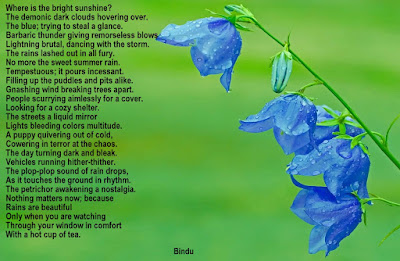 Been writing since 2008; this blog has seen me evolve. I've neglected it, not been regular. The kind of passion I had towards multitude of topics surprise me now. I was looking at my timeline and see the number of posts per year consistently diminishing. Perhaps; I got tired of writing about the same stuff or my creative juice stopped flowing or that I got pulled into other interests. Whatever the reason, its good to just go with the flow.

I write lot of poems and haikus these days compared to prose. I want to publish a book; rather few books. Well, the procrastination is strong in me. If any of this should come true; I need to set a tight deadline and start planning and implementing.

I feel energised when someone truly comments and shares views about a topic I write; when they relate to it and tell their own story or when they say they were tempted to try something after reading my post. Its a beautiful feeling. 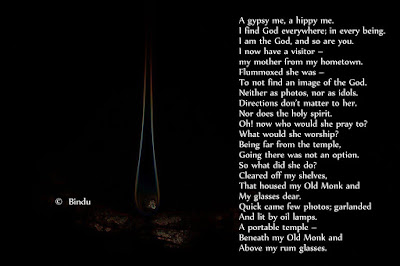 I was returning home after running an errand this evening. I saw these three guys sharpening knives in front of a bakery beside my house. 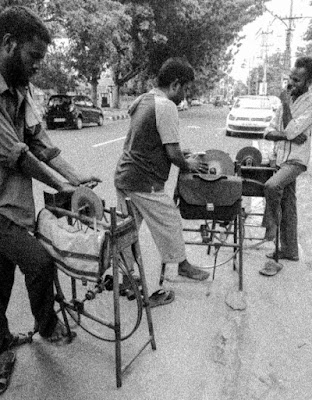 I ran to my house to get the two kitchen knives to sharpen. It wasn't necessary but I was excited. It's not easy to spot mobile knife sharpeners these days. These men were still sticking to a legacy.
What are these nice mechanical knife sharpening machines called? They are run by pedalling a wheel which rotates the grinding wheel mounted on top. The knife's edge is held parallel to the wheel. The fire sparks that emits while sharpening is something nice to look at but better be away from them.
I remember seeing them often as a kid. By the time I came back with the knives, they were gone! I cursed myself for not hurrying up. Then I saw them carrying their machines on their back and walking away. I tried whistling to get their attention, well I'm not a good whistler. So I just ran after them and got the knives sharpened. I asked them why they left so soon from the bakery, they said nobody came by to sharpen the knives and so they left.
Seeing them pedal the wheel as the knife was being sharpened was mesmerising. Yeah! i find that little joy in things as these. Moments like these take you back to your growing up years. Not everyone wait for these people nowadays. It is much easier to replace a blunt knife with a new one rather than waiting for these guys when you are not sure when they'd turn up and if you are going to be at home and notice them when they do turn up.
Busy lives, most of us work, start early and return late. And the little time we get free; we either want to chill at home sleeping or on TV or loaf around. I was thinking how much such old profession and trades are getting lost these days. We used to have women selling coconut broomsticks, rangoli powder or even men on their cycles coming to your doorstep to dye old clothes or even mobile tailors.
Alas! It's a priviledge if you come across any of these bygone traders these days.
Ramblings by Insignia at 8:49:00 PM 2 comments: 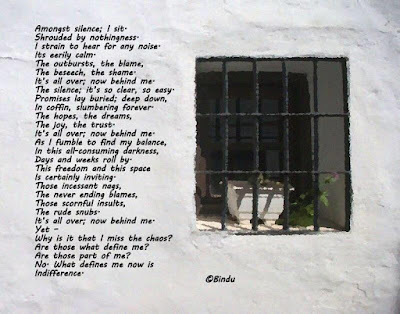 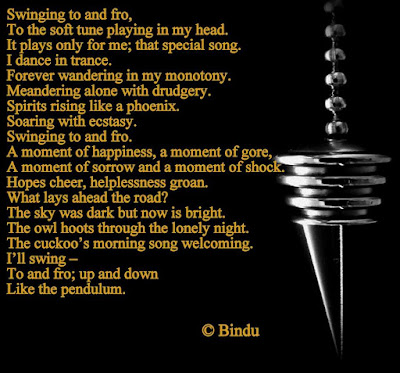