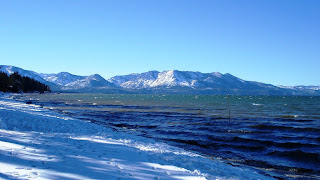 One such place where I experienced heaven on earth was Lake Tahoe bordering Nevada and California. Its a large freshwater alpine lake known for its water clarity. The lake is surrounded by snowy sierra Nevada mountains. That was the first time I was seeing a place with snow everywhere. A white blanket of snow on the streets, decorating the pine trees. Roofs and window sills of houses bordered with thick layer of snow. All this while I thought such scenes were only creative imagination of man but woho..no one can beat nature at its creative and beautiful best.

There was not a single creature or humans on the lake shore. We actually managed to sneak into it. The sunlight falling on snow capped mountains and the lake scattered the light and my eye could not take in the bluish tinge and sparkling silver.
I stood there facing the lake, the mountains and gazed at them, my senses could not get enough ot the wonder; the blue clear water, the distant mountains, the thick snow bed, the freshness in the air....
All I did was to thank the almighty for giving me this wonderful chance to experience the power of nature. How blessed I was. What more do I ask Him? I got the chance to experience heaven while standing firm on earth....
Ramblings by Insignia at 4:48:00 PM 8 comments:

Was there any need??

Few of us from various teams at work were selected to undergo a training regarding a new technology at work. The trainer was an American who had specially flown down from US and this was his first trip to Bangalore.
We witnessed a funny incident during the first day of our training. One of the participant was late for the training. He came in when we had our first break after about 2 hours of the class.
He was trying to get an idea of what was explained and what he missed. He interacted with others and all seemed normal.
The session started again and as it was an interactive one, people were free to interrupt and ask queries and discuss. This gentleman had a query and it resulted in a discussion with the trainer. What was queer here was this man until now spoke his normal language, but as he started talking to the American trainer, he started putting up an accent. everyone could sense his fake accent and it was too much for people to digest. This went on throughout the morning session. People shared their queer expressions as this guy started talking. All he wanted to talk in his newly acquired fake American accent and steal people's attention even though he had no point to make.
The unusual observation was he talked normal outside training during lunch break. It was only at class that he got transformed to an American....split personality huh??
This continued through out the day and as we were getting used to our Mr. Big, our trainer quoted an example of Lamborghini to support a statement that he was talking about. Phut!!!! here goes Mr Big again, this time with a question - "What is it that you told?" in his unusual accent. Ohhhooooo...the entire class burst out laughing. All this while, this man spoke and poked his nose into every statement that the trainer made as if he knew the world and now he asks what was a Lamborghini? It was not that all had to know what a Lamborghini was. It was just that he created too much hype as if he knew everything and anything.
Coming back, the trainer was patient, (he knew how to handle things well) and enlightened our man that Lamborghini was earlier an Italian tractor manufacturing company, which also manufactures sports car and is now a subsidy of German luxury car manufacturer Audi. Our gentleman, without battling an eyelid said thus - "Oh, is that so. I have never heard of Lamborghini. I know only HMT and Mahindra tractors" - well still with his newly acquired fake accent.
WAS THIS ALL NEEDED?
Ramblings by Insignia at 2:26:00 PM 3 comments:

Its been a while since I blogged. This particular incident occur ed about 2 months back. It was early May when I and my friend went out to finish off my tasks on a Saturday morning. We were walking on the street, when all of a sudden were interrupted by a boy. He was well dressed, aged about 15 years. He persuaded us to buy "magic ruler" that he was selling. The ruler was a flexible plastic which could be worn around the wrist as a bracelet. It also had 3D images on it.
We didn't need a ruler, and I said I don't want it. He persuaded us to buy and I thought no harm in buying one. He quoted Rs 20, which was at least 5 times the actual price. This time I definitely did not want to shell out 20 Rs for a ruler which I would never use.
I said I did not want it. He then revealed that he was selling the ruler for Rs 20 so that he can earn some money to pay his school expenses. I asked him few more details and I learnt that he would soon be joining class 10, he was trying to save much for his school fees and books during his vacation. He sounded sincere, yet I was doubtful. But his one reason of education was enough for me to buy a ruler. I paid him Rs 20 and bought the magic ruler. He went on his way.
I started discussing with my friend about the boy and his reason. I wanted to know if he was genuine and didn't cook up a story. I recalled how I struggled to complete my education. I remember all I wanted from my parents was that they spend on my education and nothing else.
The times I used to cry when they were not in a situation to pay my tuition fees on time and how I was made to stand out of the examination hall as my tuition fees were due. After much discussions, I would be let in only to lose 215-20 minutes of time and yet emerge topper..
Now that I was in having a good job and earning enough, I told my friend that I wanted to talk to the boy further. I wanted to help him financially if he was truly in need of help for his education. We would have talked maybe for 10 mins, I told her I wanted to go back to the place where we met the boy. We re-traced our path. I went to the spot to find him nowhere in sight. Both of us roamed around, to shops nearby, a park and neighbouring streets hoping to find him..Alas he was gone...How I wished I could track him down....I was disappointed...guilty that my mind didn't react fast enough........
Ramblings by Insignia at 12:13:00 PM 3 comments: