Most of my weekends are uneventful. I think thousand things to do; but do none. Yeah lazy woman growing old each day.

But yesterday was different. Saturdays are lazy most times, I sleep till noon and then the dat shifts right. Breakfast is at 12, lunch at 5 and so on. I had my breakfast at 12:30 and was lazing around when I got a call from an unlisted number from California; with the area code 408. Now 408 is the area where I have spent most of my life outside Bangalore.

Some of my good friends live there but I have their number listed. I was clueless, I picked the call and it was Gautam. Quite natural for him to just call out of random. But as we talked; I realized he was calm. I wanted to ask what was wrong, but I was hesitating since I didn't want to smell negativity just for the sake. Eventually, it did arrive that he was calm for an unfortunate reason.

We did however talked a lot about traveling, how countries like Cambodia are so near to most Indians and yet most stick to Singapore or Dubai. We relived those wonderful days at Costa Rica and time and again, regretting that it was too short of a time. Of course! Costa Rica doesn't end without chatting about William, how he has improved his photography skills and how he might be having fun with tourist girls flirting with them.

I expressed my wish to travel extensively the Central and South Americas. We talked about how wonderful it would be to have some cash in the pocket, take some time off and explore the world. After that I told my experiences at Cambodia. The people, the terrible past history,  life, food, the ancient structures, how it would be to consumed and get consumed in the era gone by. Overall, we spoke for whole 2 hours until the phone got disconnected once it past 2 hours!!

So here we were, two individuals, sitting thousands of miles across sharing a common passion.  I always wonder about not finding a like-minded person/group to pursue my interest closer back at home. It always happens, isn't it? Thats life.

Gautam recently visited Honduras and Guatamela. He wanted to make the trip to Central Americas after being enchanted by Costa Rica. I didn't know about this trip until a couple of months ago; his friend visited my home and handed me over a packet. One was the album having photos from the trip. I kept asking which place was that and his friend had forgotten which place it was :)

And the second one was bubble wrapped. I unwrapped the packet and this is what I found. 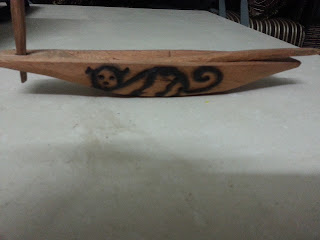 It seems it is a piece of art made by a small kid in a remote village of Guatamela or Honduras? where Gautam spent few nights. He has happened to take that toy from the kid to send it to me! This is the most amazing gift I have ever got. I can't measure its value. Here is a piece of wood hand crafted into a nice boat and paddle; and carved with a nice tribal motif of a jungle cat! 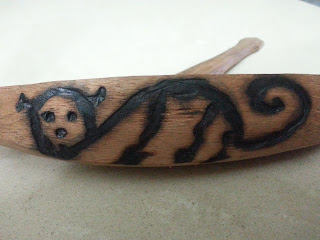 Speechless! We are still to discuss about the trip experiences.
Ramblings by Insignia at 2:59:00 PM 16 comments:

I saw a crow yesterday and got reminded of something we used to do while at school. Well, I can't say I saw a cow, they are so abundant that seeing them is expected. I observed a crow yesterday after a long time. When I spot a crow, the first thing I observe is the neck of a crow. How the habit started is an interesting story.

Every afternoon, a school going kids crowd would wait for buses at a designated stop. The area had 3-4 schools in its vicinity and they all had the same closing time. So the time between 3:30 - 4:00 every noon is when school kids crowd at the bus stop. Few would wait for the buses, few others would play at a big ground adjacent to the bus stop that belong to Indian Air Force. The area was an air force area with parks and grounds.

Just on the other side, was a railway line running parallel, few metros ahead was a overhead bridge across the line. One could get a good view of a bus on the bridge as and when they came. I am talking about mid when Bangalore was still a laid back city with no rush and madness. It would easily be a 15 minute interval between each bus coming in; and the 3:30-4:00 was a peak period with relatively more buses to cater to the school traffic. The bridge being good 1 km away; gave enough time for us to stop the games, pick our bags and make a mad rush to the road.

Now, every evening between 3:30 to 4:00, a mail van would pass by. Now we girls had an interesting belief which somehow worked. I don't know how and where this belief originated. It goes thus. The moment you see a mail van, you are supposed to hold on to one button on your shirt and observe a single black crow. Yeah, all crows all black but there are few ones which are blacky-black. What it means that most crows have a grayish-black neck. And there are few whose necks are also black. So you had to hold on to the single button on your clothes until you a single black crow flying by; and strictly a single black crow only, not in groups.

If you manage this trick successfully, you are sure to have a delicious treat waiting for you back at home. Now it is obvious for moms to prepare and serve biscuits, cakes and other such snacks to feed tired and hungry children after a day at school. Few days, the snacks would not be interesting, some other days there were worth waiting for. On days of the red mail van and the single black crow, the treats would definitely be delicious. This further strengthened our belief and each day; we would wait for the mail van and then search desperately to spot a single black crow.

You may ask, what if your dress didn't have buttons? That was not a problem. The rule allowed us to hold onto a button on your friend's dress; so we would move like a conjoined twins.

I don't think kids these days are aware of such innocent games.
Ramblings by Insignia at 9:43:00 PM 25 comments:

The ancient city of Ayuthaya

Some 80 odd kms from Bangkok, is the ancient Siamese kingdom of Ayuthaya. It makes a good day trip to bask in the ruins of Ayuthaya to take a break from the party zone of Bangkok. The name of the city indicates the influence of Hinduism; the name of the city Ayuthaya means Invincible City; taken after Ayodhya. Founded in 1350, it became the second capital of Siam after Sukothai.

By 1700, Ayuthaya had become the largest city in the world with a population of 1 million, having trade contacts with countries all around the world. Dutch and French maps show the richness of the city with grand complexes, gold-laden temples, all this reduced to ruins when Burmese invaded Ayuthaya and burned down the city. All that remains today are the ruins that gives an idea of how grand the city must have been in its heydays.

One morning, we decided to take a day trip to Ayuthaya. The previous night, we paid for the trip and got ready early and waited at the entrance of the hotel for a mini van to pick us up. One system that stumped me was how efficient these pick up and drops were. This is how it works in Thailand. You call up an agency or walk to their shop and agree on a tour plan.

They promise to pick you up at the hotel at designated time. The mini van arrives on time to your hotel for the pick up. No phone confirmation, no hassles of any kind. Once you reach your destination which can be a park or a theatre or a cruise, you don't even come to know where these mini vans go. Then when you are done with the program, the driver comes looking for you, recognizes you amongst the crowd and takes you to your van among 100s of other vans and dropped off at the hotel. Again no talks, no phones, no hassles. The drivers are so efficient. They don't expect tips, they don't talk to you; language barrier. But everything works so fine.

Anyway, after about 2 hours or so, we reached Ayuthaya with 10 other tourists. A guide was arranged for the day; who spoke English. He swiftly swung into action taking us from one place to another, explaining the history of the city, the kingdom, the temples and the ruins. Around 2 PM, the tour ended, we were treated to a scrumptious Thai meal. Post meal, we drove back to Bangkok to be dropped off at the hotel at 5 PM.

Ayuthaya was our first glimpse of historical Thailand and first genuine Thai experience. Though it is so near to Bangkok, many folks are not aware of this city. Even if they are, they simple choose to skip it in favor of crowded and over rated Pattaya. I was glad I chose Ayuthaya over Pattaya.

Devotees stick gold leaves  on images of Buddha during worshi

Rows of Buddha in mediation gives a calm and serene atmosphere

The chedis in ruins at Wat Mahathat; the temple belongs to 13th century and whats left to see are the ruins.

Phra Bhuddhasaiyart at Wat Lokayasutharam - 37 mts long and 8 mts high. The waters of 2011 flood had covered half the statue is what the guide said.

Wat Phukhao Thong - Monastery of Golden Mount of 13th century; built to commemorate the victory of King Naresuan over the Burmese. The base is Burmese style, the higher parts in Ayuthaya style. The ascent to the top was tiring but the view was spectacular.

A monk trying to meditate.

Wat Phra Sri Sanpet - largest temple with restored chedis - Wihan Phra Trilokkanat. It was built in 1448 on a site which had served as royal palace.

Large bronze image of Buddha at Wat Phra Mongkhon Bophit. The image is said to be constructed around 1538. By now, I was tired hopping from temples to temples to find larger Buddha than the previous ones. Though each image has an historical importance, it didn't seem any different than the others to a naked eye.