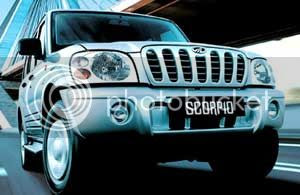 I was on my way home yesterday evening after work and suddenly notice a tag line on the boot of a Mahindra Scorpio. It read "Indian Hummer".


I don't seem to understand why Indians compare everything to something else. I mean, Mahindra Scorpio is a mean machine; having its own unique character and specialty. It deserves an identity of its own! Why mar its authenticity? Why compare its power to another vehicle. Hummer is in its own category anyways! Anyways there's already a Mahindra AXE which looks lil' bit like the Hummer and also has power, used by the Army

There are lot many things where there are comparisons. Jsut go to google and key in "India's answer to". Lo! you get many posts.


Here's another one India's answer to Gelato!!! - Our humble Kulfi it seems. Kulfi is our very own humble dessert made indegeniously. Why compare that to a Gelato?? Both have their own beginnings, own followers...

One may ask what's wrong in comparing with something already successful and proven. Hummer is a proven mean machine. You could say Scorpio is India's Hummer to personify its power. So what are we doing to Hummer in this way? Making it superior?
Well, fine we would like to compare with something that's successful

How about comparing Mumbai terror attacks to WTC Attacks? This is not a celebration to compare! Media screamed with headlines.....

"INDIA'S 9/11...TERROR STRIKES MUMBAI"
Isn't it absurd? Mumbai terror attack had its catastrophy, emotions and sentiments attached to it. Why compare???

Why do we snatch this unique identity and tag it with something else?

Update : The latest headline in India is about the Satyam fraud - being labeled as India's Enron..
India's Silicon Valley, India's Manchester, India's Oscar, India's .....when would this stop?
Ramblings by Insignia at 2:26:00 PM 3 comments:

Email ThisBlogThis!Share to TwitterShare to FacebookShare to Pinterest
Categories: Crystals

Why is it called a toothbrush instead of teethbrush?

I got this snippet from a friend of mine. This is one of the regular snippet that's being sent on email that started recently. I did get a chuckle out of this. Immediately, the curiosity in me took me under control and I involuntarily surrendered to my thought process, digging on the Internet for a possible relation between Kentucky and Toothbrush.
First, I began searching on who invented the toothbrush. I got information on how twigs, miswak, roots etc were being used. The Chinese invented the modern toothbrush in 1400s, the first mass-production of toothbrush in England in 1700s. Then I came across a snippet about first US patent for toothbrush was awarded to H.N Wadsworth in 1857.

So there I thought I got a lead. I checked if Wadsworth belonged to Kentucky, no leads. I did read some interesting funny thoughts about why its called a toothbrush and not a teethbrush even though we have teeth.
Few ideas were like "The person who invented it had just one tooth". "People were so unhygienic in older times that they had just one tooth left over or mostly toothless"....and so on.

I still didn't get an idea as to why Kentucky. There were similar statements that I came across on the Internet but this time replaced with Arkansas and then one more with Tennessee.

"Toothbrush was invented down south. If it was invented in any other place, they would have named teethbrush"


Now what is common between Kentucky, Arkansas, Tennessee? My curious nature just could not stop and there I go maps.google.com.
I see all these states are in south-east of USA. So those statements were actually a mockery of the intelligence of the people down south? I don't know.

Whatever....after probing..I got the right answer, and here I am putting it in simple words.

Hmmm...a bit of gyan here and I am happy that I can sleep without a thing biting my brain.
Ramblings by Insignia at 12:29:00 PM 4 comments:

Email ThisBlogThis!Share to TwitterShare to FacebookShare to Pinterest
Categories: Languages

Didnt find a suitable title...Suggest me one after reading the post

My friend Gautam who follows my "anything and everything" blog asked me if there were any recent postings. Thus started our interesting conversation regarding written language and later moved on to communication.
My reason for not having any recent updates were that I was bored of using the same choice of words from my limited vocabulary. I have reached a point and I feel the need to expand my knowledge and start using more words; write with very less used words that would convey the exact meaning in a more definite way.
Writing without losing the flow is one helluva task, when one also needs to stick to the context. This balance is difficult to achieve. Most of the times, in order to keep the flow, one tends to lose the context and other times, the context remains within the defined boundary while the text remains bits and pieces of unconnected prose.
Thus, both of us started to share our thoughts...(Ignore the use of vernaculars in our conversation)

me: why use "preposterous" and make people crack the word when you can easily replace that with "absurd"
so "absurd" gets used absurd number of times
:P
gautam: but preposterous is like more effect na... it is like to describe more serious reactions illa
but i get what you are saying
something like fragrance and redolence?
ha ha ha
i remember once i used redolence just of making it more flowery and now it seems so absurd!

True...The use of certain words while replacing a synonym does have a greater effect that a writer wants to convey. Here to bring that effect out - taking the word "fragrance" for instance.
This word definitely tingles one's senses to feel the sweet odor of fresh flowers, perfume compounded to give out a pleasant odor. Now the word "redolence" - dictionary defines it as "pungent or agreeable odor". Now that's relative. Agreeable to whom? Agreeable at what level?

Here is the context(From Gautam's journal)

"A cool hilly westward breeze touched everything in its way with great care and the roses scudded gently as if they were involuntarily swaying and dancing to some melodious tune nature sang. Whenever I found a beautiful flower, I stopped by it to get a whiff of its fragrance. ‘Ah, what a beautiful garden, what redolence…’ I mused. I tasted dew on the roses. It was a demi-paradise of beautiful thymes."

No matter what anyone feels about this piece of text, it sure takes the person to pleasant memories, one can feel the fragrance of the roses, the dew...the pungent aromatic thyme.

So finally both agreed that some words convey meaning in a more beautiful way; even though they have simple synonyms - given the reader comprehends and feels what the writer is trying to say along the same lines with the effect.

Yeah, but how many would comprehend the meaning as the reader wants them to? We, humans stick to the things which we are used to and are comfortable with. Hence, even though there are numerous ways to describe what you want to, we generally stick to that one "trade-mark" word.


So, we limit our description of our thoughts with just one word "Awesome". The one word to emote our happiness, shock, surprise, sadness, fear, disgust, excitement...........and so on.

I used to over-use the word "fine" for everything.

How is it going?
Fine(with frustration)

I might be a couple of hours late.
Fine(with anger, which meant "not acceptable")

"The relatively higher location of our hotel gave us a beautiful view of the lazy town below. Homes exhaling white plumes of smoke and vapor from the morning cookery through the chimneys of the brick-tiled roofs were on both sides of a narrow road, cuddling for warmth; somewhere in the middle of Western Ghats’ womb. the earth is like mother, and that place was so beautiful that it was like a small baby, cuddling and sleeping in the cool misty morning... sleeping as it had not awake yet"

LAZY town, WHITE PLUMES of smoke, BRICK-TILED roofs, NARROW road, EARTH like mother......It sure does give an idea about the place.

"We were now on our way to Annapoorneshwari Devasthanam. Someone somewhere sometime in Kudhremukh had mentioned to us the presence of a huge dam a few kilometers to the south and so we decided to check it out. It was the Lakhya Dam and it was one heck of a dam! It was like a planar side of a huge sloping hill with a thick layer of grass feeding the cattle that appeared as small dots to two guys, one smaller sitting on the not so small one’s shoulder, trying hard to reach an elevation that would avoid the foliage obstructing their endeavor to capture the massive structure from a distance of a few hundred meters. (Phew! That required some description or what?) The angle of the 50mm lens of the analogue camera could obviously not capture the entire setting, as we were pretty close to the dam. ‘Hard luck’, I thought as we turned our backs and drove off."

I could not help but ask Gautam what did he mean when he wrote "....a thick layer of grass feeding the cattle that appeared as small dots to two guys, one smaller sitting on the not so small one’s shoulder, trying hard to reach an elevation"


To me, it meant as if one cow was trying to sit on another cow trying to reach an elevation...
He told me that he was describing his friend who had a smaller physique than him and he was trying to help his friend sit on his shoulders so that they could capture a wider area on their camera....

The excitement to jot down each event in a very detailed manner did this trick..

Well, the flow and the context together with an eye for detail has resulted in this unique masterpiece.