Pardon me for MIA. Not been busy, but somehow gave a step-motherly treatment to my blog and other posts.

I have few pet peeves. I think I can put a Top 10 pet-peeve list. Among the top would be people taking/trying to take undue advantage of me posing as friends. Well, they are merely acquaintances. Who is a friend? One who is available to share your joys and sorrows - that is to put it in simple and nonchalant way.

But these lots are not available when you want to share sorrows or even joy and don't bother to share. I know of a young man who falls into this category. What do I call him? Little-close friend? Friend-type friend? or Acquaintance?

This guy is sly. He wants to have fun at my expense. Dine at a good restaurant, coffee at an upscale coffee shop or use my vehicle for commute. Never once was chivalrous of picking the tab or offering to share the expenses. Worse yet, for the sake of being polite, I have accompanied him to shopping and window-shopping for the stuffs I am least interested in.

Does it end here? No? If helping him were not enough, I was expected to entertain his acquaintance(that's what he mentioned)  who wanted to use my home as bread and breakfast for 2 days. The girl came down to the city to meet her guy friends who could not let her sleep at their house because they were staying with family. Aaarrrggghhh!

Now you know why I agree to all these? For the sake of being polite. But the rage explodes thousand times within me. These past week however, I have been saying NO to all the asks he has been making. Can I use your vehicle? No. Can I use your scooter? No. and No...no...no

Yeah, I am aware that the fault is mine, all in the name of being nice. I have decided not to be anymore, at least with him
Ramblings by Insignia at 9:23:00 PM 23 comments:

We all know the most difficult tasks we face each day right? Like waking up at the first shrill sound of an alarm or letting go of our favorite junk food to watch the waist line. But have you wondered what are the easiest things in the world? Here is my list. Now if you are wondering I would say list good things, then you are in for a disappointment.

5. Eating and Sleeping : Well, I have not heard anyone who doesn't like to eat; except for wafer thin models. Sleeping, do I even have to say anything? Just imagine a life where we dont have to earn/study; these are the only two things we would be doing.
4.Bitching : If you ask me, this one is so bad but it feels go good to bitch about someone isn't it? Evil yeah! but its easy!
3. Blame : Passing the buck is one thing we can do with accuracy. I came across a nice cartoon; isn't this so obvious? 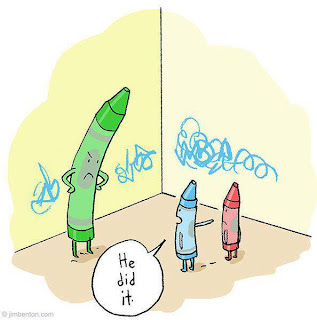 2. Complain : Favorite of them all. Just complain, don't offer any help, just complain and wait for things to happen
1. Asking generic questions. Its easy to question, try providing a solution and you will know. Why is it this way? Why not that way? are all primary irritants of our life.

I remember well, I was wearing a crisp white salwar with pink thrown in; that day. As every other day, I was waiting to board one of the route buses to office. I did not know about this particular bus number until that day; I did not see it after that day also. The bus was not empty, it was not crowded as well.

I did not find a seat, but it was more than enough that I could stand freely. There was someone behind me who I thought was close enough. You guessed it right, a guy. I moved away and there was nothing eventful until a row of seat was empty. I occupied the window and this guy the aisle. He was dressed like an executive, formals and all that. I sensed he was trying something but couldn't. I don't mind sharing the seat with men; as long as they are well behaved. This fellow was not doing anything so that I could raise an alarm and slap him hard. But at the same time, he was not quiet.

Fortunately, my stop arrived; I alighted from the bus and started crossing the melee of vehicles and started walking. It was a traffic signal; and before I knew he caught up with me. Now, I don't think this was his destination as well, but I never knew. I was walking fast and he was trying to catch up. Once he was walking beside me, he gave a sloppy compliments that I looked great. When I turned around to look at him, he was sweating like a pig.

I was more flummoxed than being angry. Now what was this guy wanting, whatever it was, he seemed so scared. I felt poor for his attire now soiled with sweat. I was near the office almost, he still seemed to be walking with me. Fed up, I just stopped and said "Do you want to talk over a cup of coffee?"

Well, I did not know why I said that, but I knew he was a coward to accept the offer. He just walked away after that. This happened 6 years ago; dont ask me why I got reminded of this incident today.
Ramblings by Insignia at 6:34:00 PM 53 comments:

Last couple of weekends, I went on a photo walk on the streets of Bangalore. Well, talking about mundane routines and various ways to beat them, photo walk seemed to be a good option. Folks who are familiar with Bangalore know the bunch of heritage colonial structures adorning the city. They are a feast to look at. As with any other developmental works, a bane is the fear of losing these structures.

For instance, one of the castles right on MG road lies encroached by Metro station and a tall glass facade on the other. I thought of capturing some of them since who knows, what happens to them tomorrow? Here are few; I will go for photo walks more often and capture such gems :)

A vintage window. I was stumped to see these huge bungalow right on MG road - Bangalore's financial and fashion district. 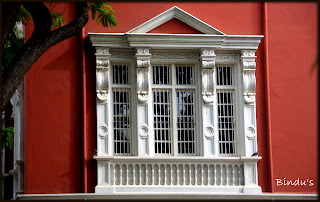 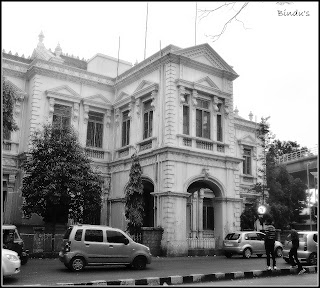 MG road vicinity has lot of heritage buildings. Their beauty is mostly shielded by garish billboards. The police station on Kasturba road is housed in a heritage building, believe it? The below building is the State Central Library in Cubbon park. I am glad the Cubbon park has been left alone. Acres of greenery admits the city is so rare; the real estate sharks have somehow not got their hands on it.

Originally called as Seshadri Iyer Memorial Hall; this one is built in 1915 in a classical European style with Tuscan and Carinthian columns. 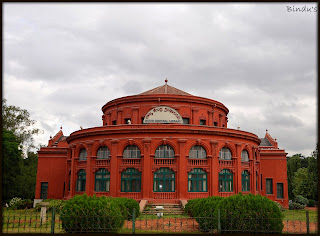 This one is Attara Kacheri built in 1864. Now the High Court. The style is Gothic. It housed the Mysore Secretariat until 1956; they are now moved to the opposite building the Vidhana Soudha. 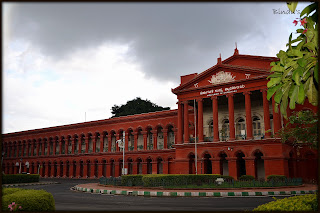 The opposite building - The State Administrative office - offices of the most corrupt men; sad to say this. The crane in the foreground is the metro work in progress underground. 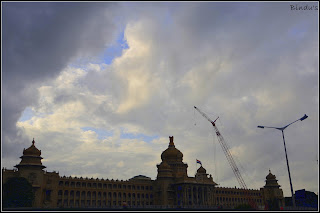 One of the towers of St. Patrick's church on Brigade Road. Its more than 150 years old. 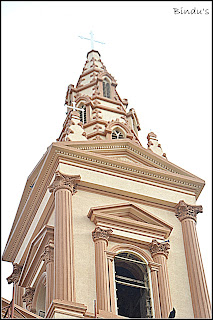