The fort of Chitradurga is always celebrated as impregnable. It was built in stages between 10th and 18th century. The fort is built in a series of seven concentric fortification walls with various passages, granaries, temples, reservoirs.

Having read about it in school, I always wanted to go; but could not make it until now even though it was just 200 kms away from Bangalore. Visited it last month and boy! I was impressed. The technology they used to build a self sustaining; self protecting fort is amazing. Few pictures from my visit. 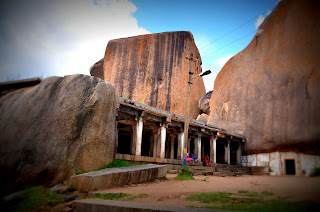 Inside the caves; underground. 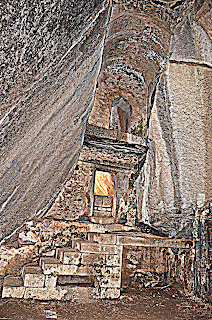 Visited the house where the last generation of King of Chitradurga lives. They have good collections of items from the bygone era. Seen here is a water can that was carried to quench King's thirst. Its not that there was no water anywhere else; just that they wanted to consume only the water from their sources. 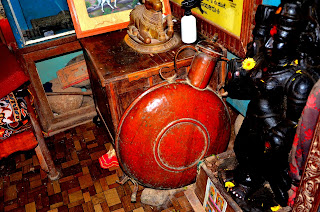 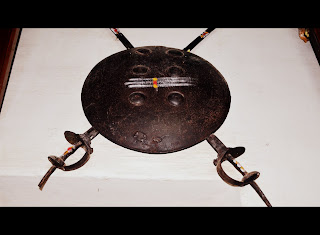 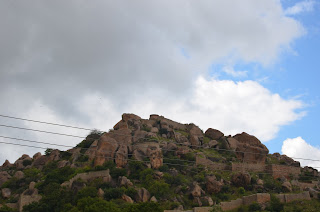 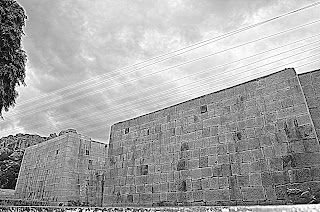 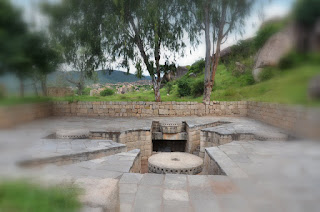 The seven enclosures had seven gates. Each has its own unique stories and art. One of the gates. 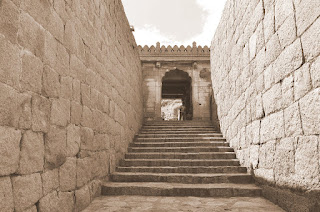 Of the lost era. 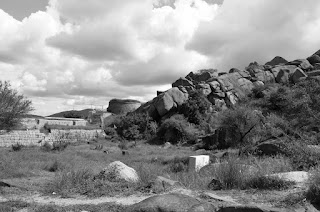 The tiny shelter was a temple. It has a 10 feet deep hole which was used to hide jewelery and other valuables in case of an outside attack. 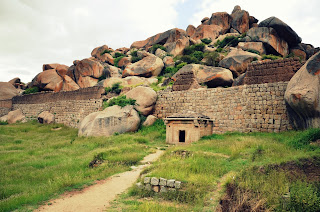 A pond laden with moss. Its said the two queens plunged to their death when Hyder Ali invaded Chitradurga. 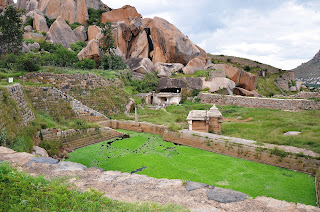 Temple and a deity worshiped by Obavva. She was a woman who fought the forces of Hyder Ali alone with a pounding staff. 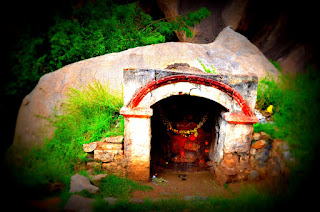 A lamp stand on the fort wall. 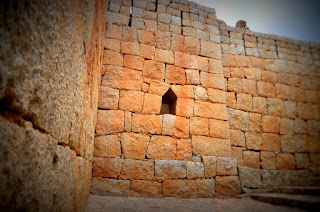 Temples on the top. 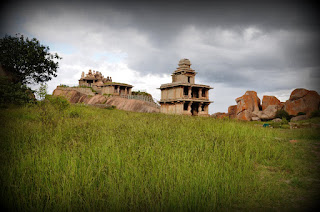 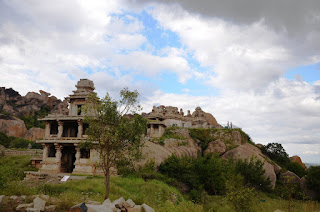 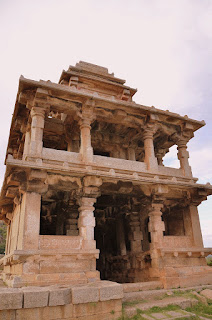 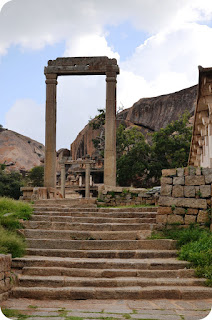 An old temple nestled at the end of the fort. 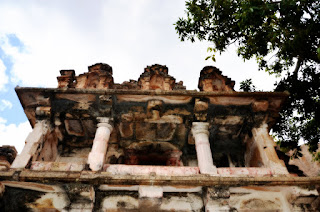 Carved out of rocks. 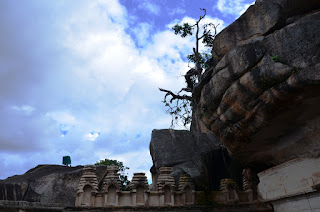 A 'Dwarapalaka' at the entrance. Almost chipped off. 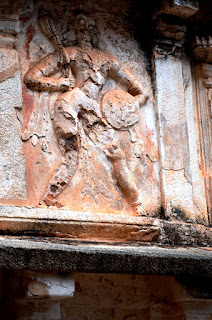 A window view of the watch tower. 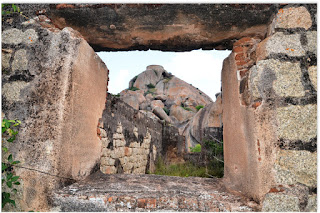 View of the town 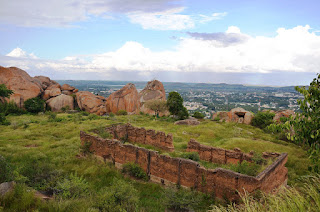 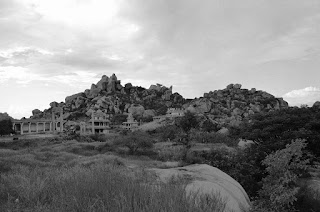 A view of the enclosures design. They form a maze. 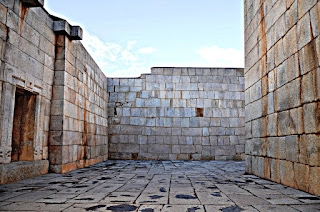 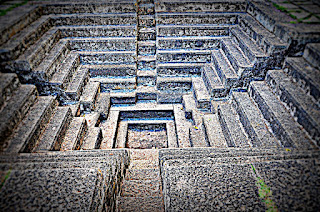 Have you any time wondered what it is to have all those quality and performance measurement goals of corporate world applied to a common man with a merge earning to feed himself?

We have all those jazzy terms to make our life complicated. What can you do if someone intends to make it complicated? Service level agreements, performance, appraisals, quality metric blah..blah..blah....

These terms were invented for the sole purpose of not giving someone something that they rightly deserve. I truly believe so. Anyway these thoughts struck me after visiting a temple. It was about - What if a priest went to work for corporate world?

What is his qualification?
His caste? Maybe, maybe not.

What are his skill sets to be on this job?
A couple of lines of Sanksrit chants. You may not even know if he is uttering them right!

What are his development plans?
Whats that?

How regularly is he updating his skills?
Nothing of that kind.

What are his people management skills?
Smile at devotees/small talk/distribute prasadams...

What are his operational activities?
Perform poojas, chant mantras, offer prasadams....anything else?

What are the SOPs he follows? Who lays down those SOPs?
Errr.....came up with funny ideas.

What are his cross functional activities?
Communicate to God, interface with Devotees...

What are the appraisal metrics on which he is assessed?
People management, YoY donation collection from Devotees.

Such a simple job, but look how complicated a corporate world can make :)

Now what if this is meeting over phone across geographies and among large group of people having their own sweet accents. There are no protocols as to how to take over a conversation, who should talk, who should listen, how to pass a topic. Its a chaos.

I attended a Global Communication skills training few days ago. The above scenario is not new; been in this situation since I joined this line of work. But what I discovered were those subtle things that we miss out. For e.g. It would be so easier if each participant mention their name each time before they mentioned something. It seems funny but it so helps everyone. It gets awkward when you have to answer a query but you don't know who asked that question!!

Another conspicuous factor is the tone and frequency when you speak; in person or over phone. A tone in which you state can change the dynamics of a conversation. "HEY! THIS IS NOT RIGHT" can always be mellowed down and instead said "Hey, You know what? This is fine, but it might not work effectively in our scenario".

What else changed apart from the tone? The choice of words. Stressing on NO, DONT, NOT is so so negative. Its a contradiction. Instead of contradiction, challenge the case in the form of a question. Instead of a "No! I don't agree!" ask "How do you think this will help our case?" This shows you are willing to pursue provided you have supportive data!

Use words that the majority of the crowd connects with. It makes it easier to present your case and make the crowd understand what you are trying to say. Last but not the least, small talk. Americans talk about weather and pets. Indians talk about traffic and food. So get into the groove and have fun! :)

A famous newspaper that is known to contain ads and gossips more than actual news had an interesting article of late.

The article started with a question as to how would you like it if you had someone who would be constantly supportive, your agony aunt or a punching bag at work? A spouse without having to marry!!

Few things sound dramatic when you give a name to them. It might be as simple as having a supportive colleague; but look at the term. Office Spouse!! The term Spouse brings in lot of packages with it - Nuptial agreement, promises to love each other in sickness and health, be loyal and honest until death..err...job hops do us apart!

Can we claim a no harm being friendly with colleague relationship as a "spouse" type? This very word is going to draw flak and make people wary of a healthy relationship at work. So yeah! you definitely would be bound to like one person more than others in the group. Like minded people would like to steal few minutes to go for a walk and talk on topics they could relate with.

There could be situations where in you could work better with a person having similar working styles than in isolation. Its all team work and productivity. Sometimes you need a person who is going through the same pain of working in a stressed environment and could relate with your verbal diarrhea. You need someone who knows the working of the organization and the frustrations of working with some people who you both know can be a pain. Should one give just a controversial name to it? I find it out rightly hilarious.

These sort of friendships among colleagues are everywhere and its a no harm thing. Tagging it with a ridiculous word as these could be extremely misleading and could lead to complications. Well why not? one would think twice before taking a walk with a colleague; lest others dont start speculating and send wrong signals!!

Imagine, the work place would be then a boot camp.
Ramblings by Insignia at 1:37:00 PM 23 comments: