An autonomous truck piloted itself 120 miles on Colorado freeway to haul around 51,000+ cans of Bud beer. This is the first time in the history of experimenting with self driving vehicles to let a huge rig drive itself. This truck was fitted with cameras, sensors, lights, radars and the needed technology to self drive itself on a freeway for a good 120 miles. Now anyone who can get their hands on one of the can of beer can brag about how it reached them.

So, are we ready for the driver-less vehicles yet? This has been debated around a lot already. But with technologies developing at a rapid rate; it's not the technology that we ought to be worried about; but about the ethical dilemma associated with such. It is of course very tempting to have someone else do the job for us; be it a person or a program while we sit back and relax or do something productive like answering emails or writing code.

But how about making decisions that involve morality and ethics? These are debatable and very perspective. These depend on lot of factors like the environment we are brought up in, culture, beliefs and social and moral responsibility and thus judgement might differ from one person to another. I was interested in this bit more and started digging up few topics to read.

Learnt a couple of new things. Trolley problem - its an experiment in ethics. In summary; there is a trolley running down a track. Ahead of the track; five men are tied to the track and unable to move. The trolley is headed straight. You are standing few distance ahead next to a lever; if you pull the lever, the trolley will move on another track where one person is on the track. What do you do? Do nothing and let five people die or pull the lever and switch the trolley to another track and let the one person die? Which is the most ethical choice? It poses a life or death situation where depending on the action you take ensures death of certain people and an alternate action means death of several others.

There are so many arguments and discussions around it. And this puzzle determines human psychology. The Trolley problem so far remained a philosophical conundrum but now has become the basis of breaking their head for these autonomous vehicle software designers. Driving is a social responsibility; onus being completely on the driver. The driver is solely responsible for what happens; what the vehicle does. You hit a pedestrian because you were texting while driving; you are responsible.

But with software algorithms taking over the job of "driving" for you; you are also cleared of such social responsibilities. These algorithms respond based on pre-written rules; there is no cognitive process involved here. This is where it gets tricky. This is where your ethical and moral reasoning comes into picture. Let's say you are driving a vehicle and a kid jumps on the road; would you go straight ahead killing the kid or swerve and hit a barricade which ensures you'd end up getting killed?

Every other automaker is experimenting with autonomous vehicles. Seems few vendors have taken a different approach. In this case; the vehicle will plow right into the kid. The reason being as a brand; the product has meant safety, security and other privileges for more than a century. So its automated software will choose to protect its passengers above all others. Of course; who wants to buy a vehicle which might choose to kill you in any given situation, right? And its not difficult to see every other vendor opting for this approach. So we might end up with a fleet of self driven killers who would choose to save their passengers/customers over good of the society.

Imagine; these are not far fetched. But on the flip side; can it get worse than humans? Distraction have always been an issue with us humans. And these autonomous vehicles might end up with a better driving record. And there may be counter technologies to save from a disastrous situation; like limiting speed, an air bag kind of equipment around the vehicle or a scoop up kind of utility on the front hood which will pick the pedestrians instead of hitting them. We don't know yet. While technology is picking up; it is really amazing to see them being used to drive efficiency and assist human beings.
Ramblings by Insignia at 4:18:00 PM 2 comments:

A dark skinned non-oriental feature lone woman walking down the street. Shabbily dressed; a pajama and a T shirt, trainers and a worn-out hat to get some respite from the evening sun rays; looking around, taking in everything the eyes can register. From the distinct aroma of noodles and grilled meat, old men slouching on chairs and some crouching doing nothing, the muddy waters of the river, kids playing with sticks and lump of mud; unkempt and not a care for the world. I wonder when was the last time I saw kids entertaining themselves with nothing but their creativity. Not seeing them glued to a TV or a smartphone or a tablet was kind of shocking.

The twilight was contemplating; whether to arrive or just let this moment linger on for a little bit long. Centuries old Wats(Buddhist temples) stand alongside modern patisseries offering free WiFi to be connected with the world. The courtyards of the Wats are unassuming providing the perfect contrast to the gilded roofs and walls of red and gold of the main temple. Monks clad in bright orange robes trying to go about their ascetic ways; now seemingly tough what with too many things to indulge in. A young monk walked with a broom and started sweeping the street. Another one started taking snaps of the monk in action. It was amusing to watch and I so wanted to know if those monks who live an austere life by seeking alms every morning and evening have a social media account as well? Chuckled at the thought of Buddha's no desire principle clashing with Mark Zuckerburg's stay connected venture. 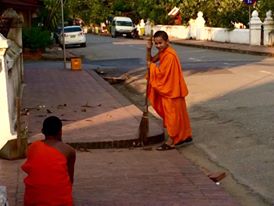 The heaven tries to open up; yet its hesitant. It decides a drizzle is good enough and the dampness in the air still does not budge. As I walk; crossing scenes after scenes - it occurs to me its all similar. There is sanity; if you observe amidst the cacophony and frenzy. Yet; in that sanity lies the confusion and madness. Thoughts in my head, two personalities debating over which one is true. Out of reverie; I see a tuk-tuk driver expectantly waiting to be asked to be hired. He asks - Tuk tuk? I smile and say no, thank you. On my right; is a public school compound. Empty; school for the day is done. And then; a knock on my head. I look up; a tamarind tree just decided to drop a tamarind on me. I bend down and pick the tamarind and contemplate what to do with it? I carry it with me; did not realize when and where I lost it. 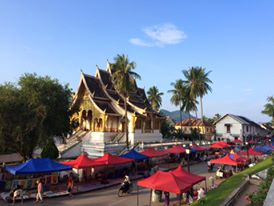 As the twilight set in; the roads came alive with more activities. Street markets, street food stalls and more. Locals and visitors walking around alike. I walk to a nearby stall and inquire the price of a stack of handmade paper. The haggling starts; a couple of minutes later; price agreed and my item is packed. The lady then asks "You from?" I say - "India". "Oh!..with you?" to which I respond "just me". She asks "one?" I say "yes, just one. Me, alone." What did I see? A sense of pity on her face. She feels sad for me. "Oh! why? alone?" I smile and say "I like". I think she got my point. She then asked "You happy?" I smile and nod.

I continue my walk..