I won't prepare coffee in the morning. I would like my coffee while still on bed and you should prepare and bring it to me.

I won't cook for anyone. You may visit my home but you've got to take care and cook and feed for yourself. I would also expect you to cook for me; but of course I won't insist or stare at you when you are eating.

I am not an entertainer. I won't entertain you; but I have made provisions for the same. I have a BIG Plasma 3D TV for you to watch and get entertained while I may read a book in my own space.

I won't say "chooo chweet" or "cute" when kids yell. They better STOP!

God bless if the maid doesn't turn up. I will go fasting for days; but I won't cook! Who's gonna wash the vessels and clean up the kitchen?

Don't expect me to listen to you, hear your problems and cuddle you up. Go find a teddy bear.

I fight; and I fight. That's it. Don't wait for me to come up to you and make it up. I won't (crossing my hands now!)

And man! why should I try changing you? Don't think I might try to bring you in line.

I also don't expect you to hold the door open for me to pass.

Nor do I expect you to pay the bill at the restaurant.

No; I don't want you to pull the chair for me to make me comfortable.

I don't wait for you to offer to drop me home - I can hire a taxi.

Yes, I can fix a light bulb and I can clean the ceiling.

AND don't expect me to be a carrier of your future progeny.

If you've  developed all these ideas by reading mushy quotes; wake up!

I am a WOMAN

Last weekend, I visited a friend's house. Her brother got married last month and due to my accident; I was not able to attend the wedding. So made it up by visiting them last week at their home. Now, any chat up generally brings up work related stuff and then it occurred to me. I mean in a flash!

Why didn't it occur to me all these days? Maybe it was so normal and obvious. Any kind of meeting; be it with friends or family; or distant relatives or even a social gathering with strangers. You'll find they are all engineers; most of them if not all. The topic of work never stops to creep in at these gatherings. And without even realizing; you have started a whole plethora of talks that may seem to a layman that here is a mad group!!

For one, when we talk about 'reproduction', don't assume that we are planning our family. It may give you a heart attack when you hear things like "I reproduced a dozen times" by a frail looking unmarried girl. And yeah we try to 'reproduce' 'bugs' all the time. We don't want a healthy baby; just bugs. Bugs when we talk are not crawly creepy insects. What we are discussing here are 'reproducing the issues in software'

We will be a bunch of faded-jeans and loose T shirt wearing folks; with very few of them giving any attention to fashion. But the gadgets will tell you a contradicting story - smart phones, sleek notepads, tabs and what not from the US of A. And yeah; the must have accessory are the dark circles beneath our eyes and the fat around our belly. Gift of working as a techie I say!!

No gathering will exist without having a person who has just returned from 'onshore' and another one waiting to go in that group. The 'onshore' is most time US of A. It can also include Europe and Oceania. And yes, we will draw comparisons towards anything starting with "In America......". Don't get confused if you see someone struggling to use a fork and knife to eat his pizza; he is preparing himself to go 'onshore'. You will be shocked; but we are the only ones who are excited about the sliding rupee!! More rupee in hands when dollars are exchanged!

We 'churn' codes and 'heat' maps. And if you hear us talking about Jar, Cookie, Beans...no its not about food. We are talking softwares. We keep processing; day in and day out; an we upload and download once in a while. What? Don't think naughty now! We purge and make things obsolete at whims and fancies. Today its a bug, tomorrow its a feature and we file a IP!!

If you give us a warning, we aren't really bothered you know. We just look for errors. So if you are amidst such a group; which you will most likely be when you are in Bangalore; just switch-off and switch-on the way we techies do!! Thats what software has taught us.
Ramblings by Insignia at 9:07:00 PM 22 comments:

Now, Angkor Wat is the name everyone identifies. But Angkor Wat is one of many such temples that exist in Siem Reap. Few of them older than Angkor Wat, few more grander and bigger. As such, its not possible to get a guide for whole day. For one; its not about the expense; but about the control of time. You have total control of your time and can choose where you want to spend more time and the ones you want to skip.

Nothing is worth skipping but since the sq km area clustered with these temples run into 100s an you may need over a month to visit each one. And if you are from India; you wouldn't really need a guide since the temples are designed around Hindu mythology. Even if you are not a Hindu; you will know most things and then the temples and the art are self explanatory.

After Angkor Wat, we visited Bayon. Bayon is just across Angkor Wat. Its a 12th century temple built by Mahayana Buddhist king Jayavarman VII. Note that Jayavarman VII covered to Buddhism whereas his predecessors were Hindu. The conversion happened due to the influence of Sri Lankan Buddhist monks who visited Angkor kingdom. The capital of Jayavarman VII was Angkor Thom. If you have to visualize, all these places are just less than a km away; but each king had his own capital and a state temple.

Whats special about Bayon is that unlike a conventional temple tower design, the edifice has distinctive feature of numerous and serene stone faces on the many towers. The 54 towers has a total of 216 gigantic faces stares at you. Some historians believe that these are the faces of Bodhisatva called Avalokiteshvara or Lokeshvara while there are also conclusion that the faces may also be of King Jayavarman VII as DEVARAJA "God King" since the stone faces bears a strong resemblance to the king himself. These two theories need not be mutually exclusive. Later part of the 13th century saw the temple undergo modifications when the Khmer empire reverted to Hinduism and further alterations when Theravada Buddhism was adopted.

So what was my reaction? Well, by now I must say I was too stunned to even react. I kept thanking God for blessing me to be able to see these marvels and at the same time; feeling the walls of the temples to confirm I was really there. The feeling is overwhelming; nothing prepares you for that experience. If you ask me to describe in words my feelings; I can't. Visit Siem Reap to understand what I am trying to convey

Such tours are common :) 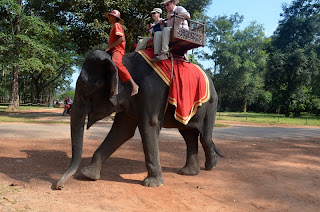 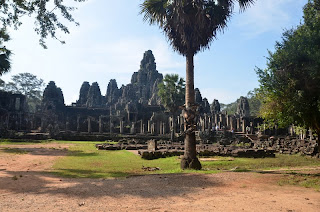 A scene of a day to day life on bas relief. A VIP on his way 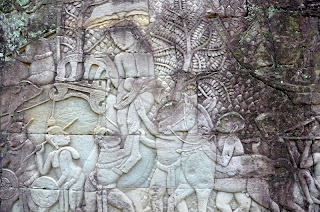 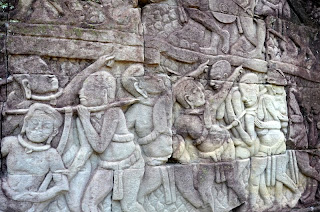 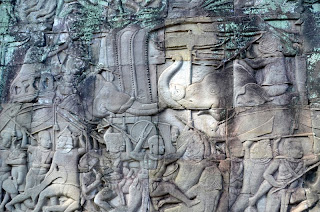 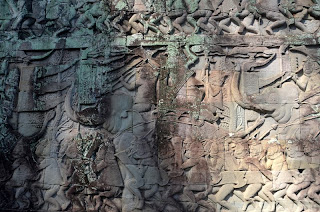 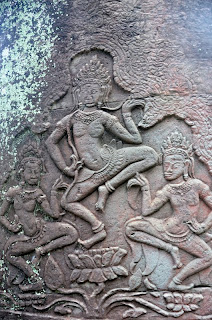 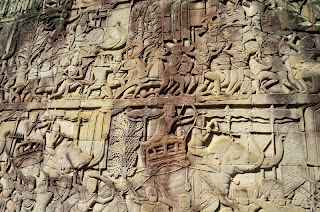 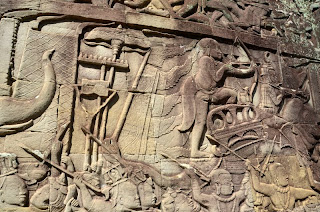 Everyday life of a Khmer 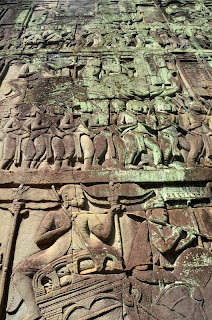 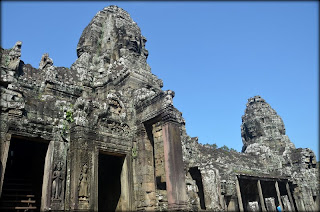 This is what i was talking about 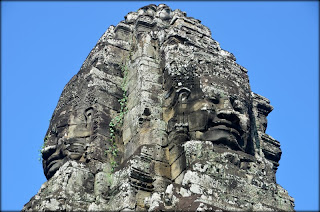 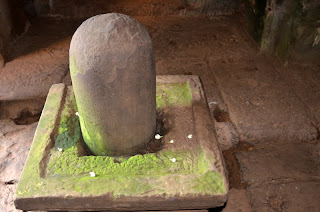 Leaves you stunned; imagine gigantic faces looking at you which ever way you turn 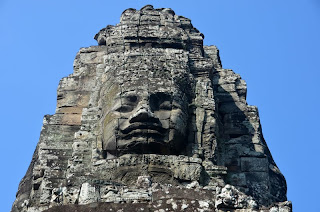 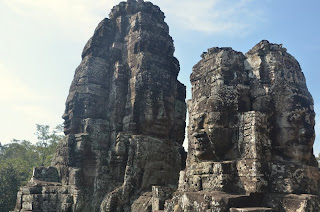 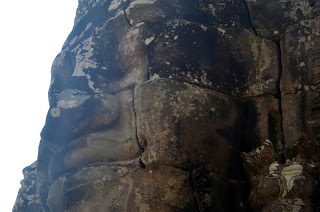 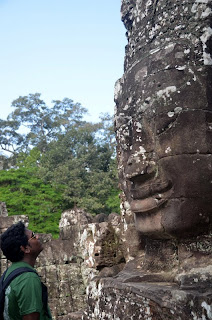 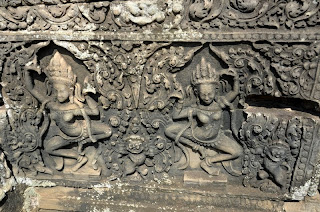 A unique one; if you observe the image is smiling and the teeth are visible 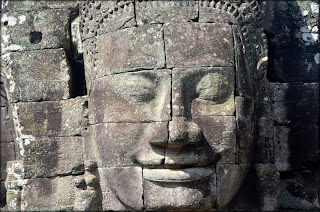 I will die to be experiencing this

A very close up of a face. As you go to the top most courtyard; the gigantic faces come face to face with you 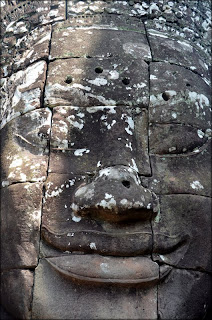