All of us have that one trigger point that would get us into a conversation. That topic that breaks the ice and lets even the shyest person to get talking. For some, its the weather, for others football or movies or books. For me, its always travel.

A friend knows that too well. When he gets his other friends and I go quiet and try to hide myself; he will casually mention to others "Ask her how many places she has traveled?" and there! i am now forced to talk and after few minutes, the conversation becomes so easy! Now! that is how you get me talking. It has happened at work as well.

I got into the habit of collecting fridge magnets from wherever I visited. Earlier, it was one magnet per city; then as they grew exponentially, I limited them to a magnet per country. This is how my fridge at home looks now. 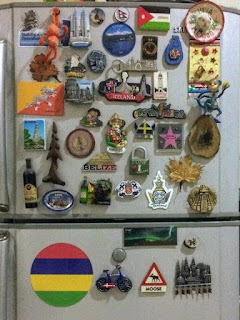 Not many yet, but it sure is eating up the real estate.

Recently, I had to call in a maintenance service to fix my fridge. The guy who came in to look into the issue was particularly interested in the Cambodia fridge magnet. I am wary of strangers; especially if they are in the house attending to a service call. Yet, I was able to answer all his questions about Cambodia. He apparently watched a documentary about Angkor Wat and has been interested to visit it since then. He wanted to know the flight charges, visa, how long to fly and how many days would he need. He was also inquiring about how much it could cost him. Some of his comments were interesting.

"Why did the Cholas had to go that far to build temples?"
"We should pay to see the temples built by our own people!. Ridiculous!" - when I mentioned him about Angkor Wat park entry fees.

I also shared a little about how the country now is Buddhist and these Hindu temples are all Buddhist temples now. A perplexed look, a sigh! Meanwhile, the work was done and off he went.

The first time I ever saw a navigation device was during my first trip to the US back in 2006. I gaped at it in utter disbelief. How can these folks trust a small device to take them to their destination? Back in India, we relied on fellow people right? Either stop at a road side tea shop; sip a cutting chai while asking for directions. You'd get a "go straight, take left, take another right; you'll get a round about. Just stop there and ask someone; they will guide you further". That was the norm. Now! there is this pager like device mounted on the car dashboard that's speaking to you. One of my friend had named the lady of his GPS "Jill".

I got used to it; the way I got used to many other things. Anyway; what prompted me to write this post is this strange phenomenon of us Indians trusting an internet app. For someone who is tech-savvy; its a no-brainer. But for the tech-illiterates; the advent of Google maps to navigate has been a slow admission. Maps has been there for a while now; but I see the cabbies and others have embraced it only recently. Few months back; when a cabbie or an auto driver asked me where to go; I would truthfully admit I dont know the route and that I will switch on maps. My answer would be always met with disgust. "Computer? Madam - computer hege heluththe?" - Madam, how can you trust what a computer says? And then they'll set about asking passer-byes for the direction.

The past few months though; I have seen a round about. Cabbies are relying on maps and dont trust the decision of a human being anymore. Few days back; a driver (mind you, a learned man who definitely knew how to use maps) at a traffic signal asked my cabbie the direction to a place. My cabbie's smart answer - "You have phone right? Use google maps. It shows the roads accurately. There is no need for you to ask anybody anymore".

And today; I was chided by the cab driver for directing him on an alternate route and for my back luck; there was a traffic jam in the impossible of places! He told me "That's why, we should listen to what Google says. My fuel is getting wasted. We could've reached by now". I did not utter a word.

This may seem nothing; but to gain trust of people who are stubborn to let of their old ways and who are suspicious of technology; it is a big deal. Google Maps has come up with ads with the tagline "LookBeforeYouLeave where it says how Google Maps can help you address traffic issue and how it can preempt your woes on the road by showing an alternative and fastest route. These ads are aptly made for Indian audience, drawing scenes from everyday life like how a wedding procession on the road or a cricket match can make roads unpredictable. This intelligence the app uses to make decisions is a boon for a frustrated Indian who already has a nightmare that is Indian road. The app now supports vernacular too.

I have thus decided to not face the wrath of my cabbie hereafter and just let him trust his maps!
Ramblings by Insignia at 10:14:00 PM 5 comments: